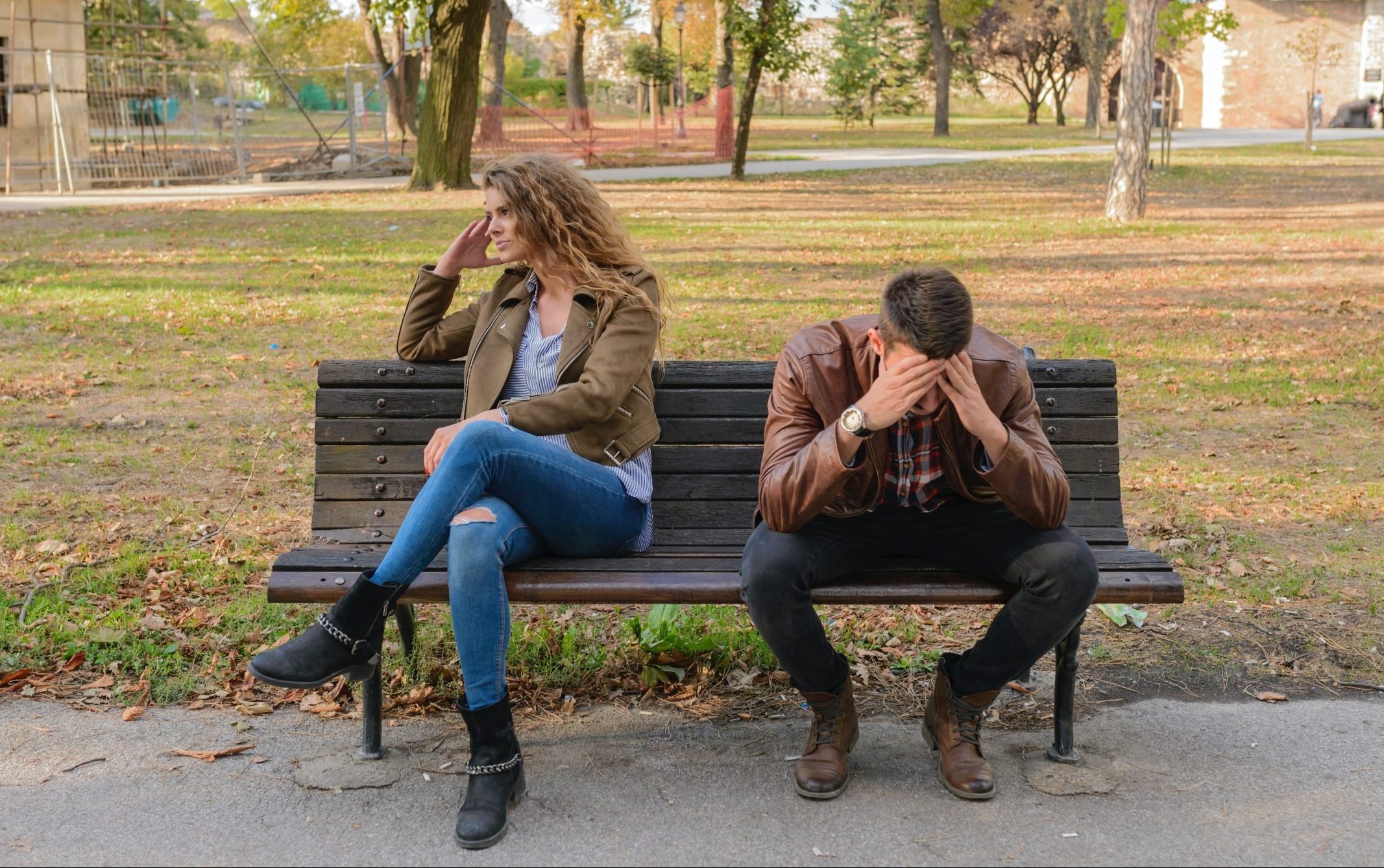 Marriages that come to an end, don’t happen overnight. Think of them as aerospace crashes or accidents. There’s always a series of things that bring down the plane, not just one. In fact, it’s impossible for one single event to damage a relationship, to the point that it implodes and so much of our love, time, and energy are wasted. You are probably having trouble identifying the signs that something bad is being allowed to fester in your relationship. Marriage is a road that you should never take your eyes off. That little bump you felt in the road, may have been a pebble, but it’s a warning sign. The pebble will turn into a rock, which jolts the car. Then it turns into a boulder, causing you to swerve, but eventually, it will become a brick wall you cannot pass.

Putting up with your quirks

Everyone has their own little personality defects or little quirks that make them annoying. Nobody is perfect, so don’t overthink what you’re about to read. You are irritating. Take a deep breath and just accept it. We all have some things about us, that can rub people the wrong way. Do you fuss over your makeup when you’re both trying to catch a dinner reservation? Are you a bit needy when you feel nervous about something? Do you keep clipping your nails and forget to pick all of them up? Do you talk down to your spouse?

You could be doing any or all of these things, without realizing it. Women have some quirks that men don’t like. Do you turn the ambient house or room temperature up because you feel cold? What about him? When he gets home from work, do you become bossy instead of encouraging, regarding chores around the house? Do you become a backseat driver when you’re traveling together?

Men aren’t innocent either, they do some things that annoy their spouses too. Stereotypically, they leave the toilet seat up. They have poor hygiene standards. They might be too sexually demanding and don’t take into account your needs. Do they leave their dirty clothes around the bedroom?

If you want your marriage to last, you have to talk about each other’s quirks. Although on their own they’re not that big of a deal, over time, they add up and up until you feel like screaming! How you fix this is being more conscious about your quirks and physically stopping yourself from doing them.

It’s subtle but it’s very present. The feeling of being superior in a relationship can approach and take over your psyche like a stealthy Navy Seal. But, where does this need to feel better than him or her, come from? Married couples have to realize that it’s human nature to want to compete, and in any team, there will always have to be a leader. So many of us are taught by movies, romantic novels, and even relationship shows like The View, that married couples are equal and that both people have shared power. However, we need to accept that this is not the case and in fact, has never been the case. There is always a power dynamic in play.

The simple fact of the matter is, when it comes to harrowing situations, like hearing a bump in the night downstairs, the physically and mentally stronger person, will go to protect the family. This evidently, is the man. But, and it’s a big but, that doesn’t mean the other partner in this team is lesser. It just means that one person has to take charge in certain situations. Learning to accept that one person needs to lead the team, is something that takes time and understanding between two lovers.

Are you speaking to, or talking with them?

Women are very happy to tell their husbands that they don’t like his ‘tone’. Men, on the other hand, aren’t so ready to say that. And yet, they do feel the same way. The tone of your voice does matter when you’re communicating with your spouse.

The tone and pitch of your voice can be the difference between speaking to your husband or talking with him. Speaking to someone is like giving orders to a subordinate. Talking with someone is approaching the situation on a level playing field. Here are some examples.

Speaking to – “When are you going to take out the trash?”

Talking with – “When you have time, could you take out the trash?”

Talking with – “Are you able to make me something to eat, at the moment?”

Speaking to – “You need to wear the blue dress”

Talking with – “I think you look better in that blue number”

It’s very subtle, but it’s very noticeable if you’re listening out for the difference. On paper, you can see the biggest difference. When you’re speaking to someone, you’re usually going to be using fewer words. When you’re talking with your spouse, you’ll almost always use more words. This is because you’re not just trying to achieve one thing but two. You want something to be done, but you don’t want to disrespect or be too demanding. Language is so powerful in a relationship, the little things like this, really do matter.

Partners in each other’s downfall

Married couples are likely to do good things together, but also, bad things together. When you have been bound by holy matrimony, the responsibility of sticking by your spouse can become a morally corrupting experience. You chose to love this person and before God, promised to look after each other in sickness and in health. Just like the flu, their sickness can become your sickness, if they are someone who suffers from substance abuse. They may have talked you into it, you may have enabled them, or you both have the same craving and you become partners in each other’s downfall.

Fear not, if you ask for God’s help and come to terms that you both need to recover together, then there are options for you out there. Search for couples rehab near me, and you’ll find a wonderful array of treatments. This particular rehab center has couples rehabilitation, for both inpatient and outpatient. They believe that couples who follow through drug treatments together are less likely to relapse. Your spouse becomes your rock and they become yours. The great thing is, two minds work better and since you know each other’s personality, you can identify and eliminate triggers for each other. Married couples going through rehab will have a lot of time to talk through how they got involved in substance abuse and what they could change in their love lives to stop it happening again. The therapists at the center have one-on-one couples therapy and group couples therapy sessions too.

We would be in a horrible world if we couldn’t criticize each other. It’s how we as a society, make sure that we’re upholding values and customs, so we can live in a better place. Married couples who do this too often, become distant and dreading each other’s company. This is because, when you live with someone, criticism all the time becomes belittling. Have you ever been with someone you love, that constant rags on your appearance? They constantly say passive-aggressive things that make you double-check yourself. They sap away at your confidence. Their words of criticism, slowly become barbs that puncture and delete your confidence.

Don’t allow this to happen to you or don’t allow yourself to become this type of partner. Elevate your spouse by giving them two good compliments for every, one critique. If you think your husband has put on a little weight, you should approach the situation like this.

“Darling, you look great in that shirt.” And add something like, “You’ve always had nice taste in clothes”. Now come with the critique, “Maybe you could look even better if you trimmed your waist a little”. See that? You elevate them with compliments, tell them something you genuinely like about their body and style, but that they could look even more handsome if he lost a couple of pounds. It’s no big deal, because you’re not pointing the finger, but trying to boost his confidence and desire to improve.

Put down your cell phone!

When you’re having dinner together, don’t text or check your social media. You’re having some time together and it shouldn’t involve your friends or whatever is going on in the world. It’s so frustrating for a spouse that wants to catch up with the person they love, but the other party is too busy checking their Instagram. Support the human connection, look at each other, and take the time to listen and engage in a conversation. After so many years of being together, you might think you’ve heard it all before. But, that’s not true, there’s always something new going on. Don’t give up on a good conversation!

Marriages can be brought down by one person, or both people involved. It’s a constant battle but if you love that person, you will fight tooth and nail to save your holy matrimony.

You may also enjoy:

This site uses Akismet to reduce spam. Learn how your comment data is processed.